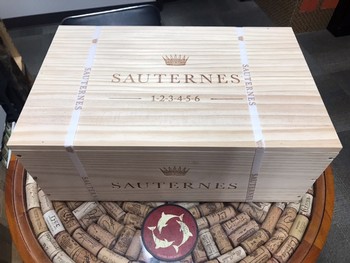 Extremely rare and unopened case of 12 half bottles (375ml) of the prestigious Chateau d’Yquem, best Sauternes producers from the Graves area in the Bourdeaux region. The case still has inatct winery seals.

Each half bottle is a blend of at least three vintages and there are two half bottles of each kind, for a total of 12. Below are the details:

Sauvignon Blanc, Semillon, and Muscadelle grapes used for Sauternes wine remain on the vine after the harvest.  The special climatic conditions of Sauternes encourage botrytis. This means that the grapes desiccate, concentrating their sugar content.  It takes many vineyard visits to gather these tiny, shriveled berries at the point of perfection. After vinification, the wine matures in barrels with varying amounts of new French oak.

Château d'Yquem is a Premier Cru Supérieur wine from the Sauternes, Gironde region in the southern part of the Bordeaux vineyards known as Graves. In the Bordeaux Wine Official Classification of 1855, Château d'Yquem was the only Sauternes given this rating, indicating its perceived superiority and higher prices over all other wines of its type. Yquem's success stems largely from the site's susceptibility to attack by "noble rot" (a particular kind of infestation by Botrytis cinerea).

Wines from Château d'Yquem are characterised by their complexity, concentration and sweetness, which is balanced by relatively high acidity. With proper care, a bottle will keep for a century or more,[1] and the fruity overtones will gradually fade and integrate with more complex secondary and tertiary flavours.

Be the first to review this item »
1 In Stock
Tweet
Email
Wine Specs
Appellation
Sauternes AOC
Wine Profile
Tasting Notes
In their youth, Sauternes de Chateau d’Yquem cuvees reveal aromas of fresh fruit, particularly citrus, along with the candied notes characteristic of noble rot wines. The texture on the palate confirms this combination of delicious freshness and pure density. As these cuvees age, the aromas of plum and orange jam reveal themselves, while the freshness is maintained thanks to a pleasant, zesty bitterness that balances the sweetness. The more these cuvees age, the more intense these candied, spicy and zesty notes become on the palate.
Food Pairing Notes
Though Sauternes is a sweet wine, and mostly drank with dessert, its brisk, palate-cleansing acidity enables it to pair well with white meat, like turkey or chicken, as well as with the exotic flavors of Asian food. The reason is that the lively acidity of Sauternes contrasts with (and also cuts) the sweetness of most Asian dishes, and the same time, the rich sugar in the wine complements the food’s sweetness. Perhaps the easiest way to enjoy Sauternes is simply as an aperitif, as is typical in Bordeaux. Hosts serve iced Sauternes to greet guests in the same way as many people around the world ceremoniously open a bottle of chilled Champagne.